The beautiful Hoysaleswara temple is a stunning masterpiece with exclusive carvinthegs.

The Hoysaleshwara Temple is situated at Halebeedu. The earlier name of halebeedu was Dwarasamudra - meaning (the door to the ocean)

The Hoysala era was an important period in the development of art, architecture, and religion in South India. The empire is remembered today primarily for its temple architecture. 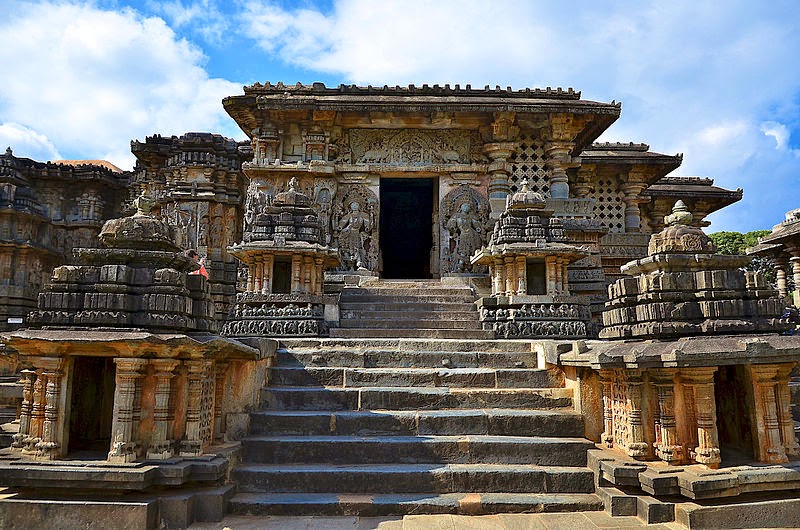 An entrance into the Hoysaleshwara temple in Halebidu
is the building style developed under the rule of the Hoysala Empire between the 11th and 14th centuries, in the region known today as Karnataka, a state of India. Hoysala influence was at its peak in the 13th century, when it dominated the Southern Deccan Plateau region. Large and small temples built during this era remain as examples of the Hoysala architectural style, including the Chennakesava Temple at Belur, the Hoysaleswara Temple at Halebidu,and the KesavaTemple at Somanathapura. Other examples of fine Hoysala craftsmanship are the temple at  Belavadi,  Amruthapura, Hosaholalu,Mosale, Arasikere,  Basaralu, Kikkeri  and Nuggehalli. Study of the Hoysala architectural style has revealed a negligible Indo-Aryaninfluence while the impact of Southern Indian style is more distinct. Along with the images of the Gods running above the railings, one can find greater details of Ramayana, Bhagavatha, Mahabharatha and instances of Bhakta Pralhada which are nicely carved. It at least takes 2 hours or more to understand stories behind each scene being depicted over there.
Knowledge of Mahabharatha & Ramayana along with Hindu Gods, their avatars (forms) would be crucial to understand the workmanship exhibited on the outer walls. There are six railings before the wall images are present. The first railing has Elephants present surrounding the entire temple, the second railing consists of Mystic Lion which is exhibited in many postures.
The third railing consists of Cavalry forces with men and horses dressed in war attire, the fourth railing consists of Makara which is a mystical animal as explained earlier, and the sixth railing consists of Swans which hold set of beads in their beaks. Above the sixth railing the seventh railing consists of Wall images of all Hindu Gods and Goddesses.
The beautiful Hoysaleswara temple is a stunning masterpiece with exclusive carvinthegs. There are more than a thousand figures all along the walls of the temple. You can see scenes from the Mahabharata and Ramayana on the walls of these temples. The Hoysaleswara temple was built as a mark of respect to Shantaleshwara, (the queen of Vishnuvardhana) and Hoysaleswara. The temple has been built in soapstone. The architecture reflects the beautiful paintings during the Hoysalas’ rule. The shrines face eastwards. The temple walls have intricate stone sculptures which give the temple a different look. The Hoysala architecture is fine and this is clearly visible in the paintings spread around the temple.. 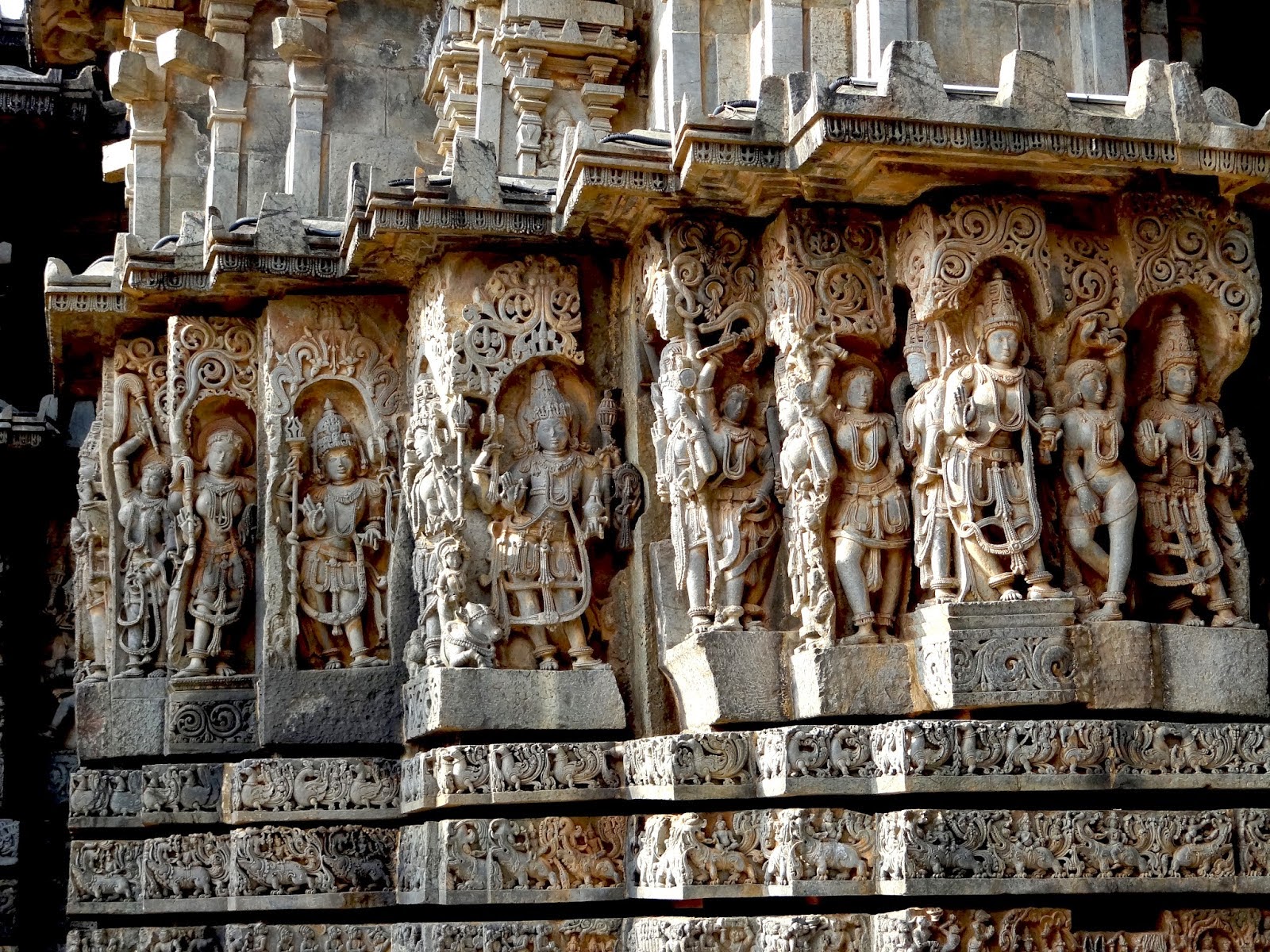 Ornate wall relief and molding frieze in bas-relief at Hoysaleshwara templ in Halebidu; 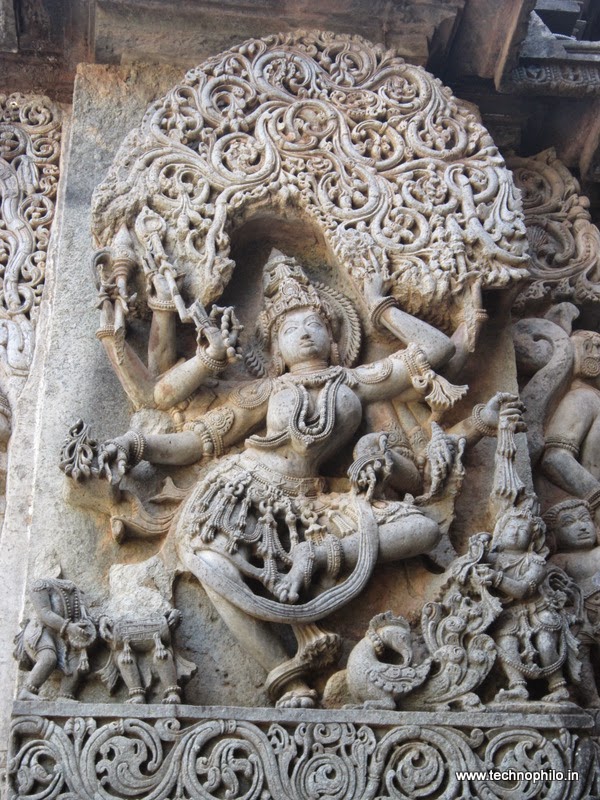 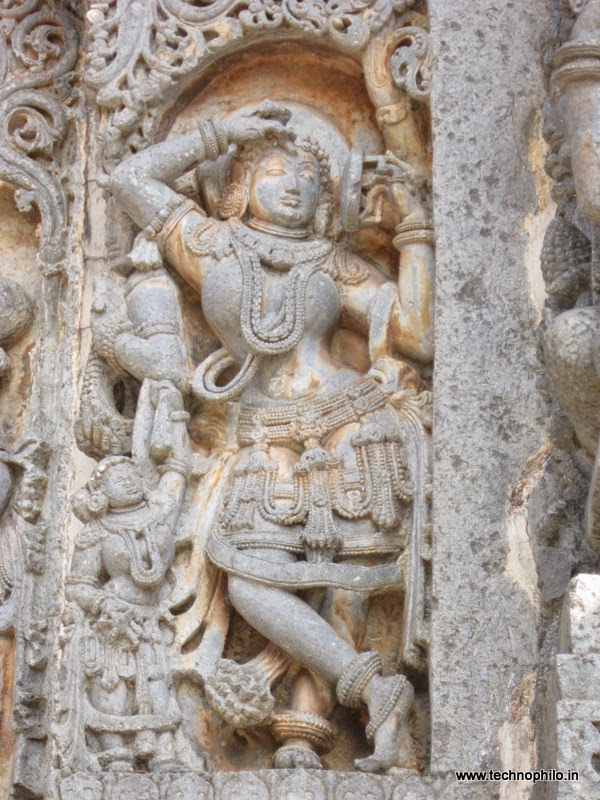 Woman keeping Kumkum on her forehead looking at Mirror 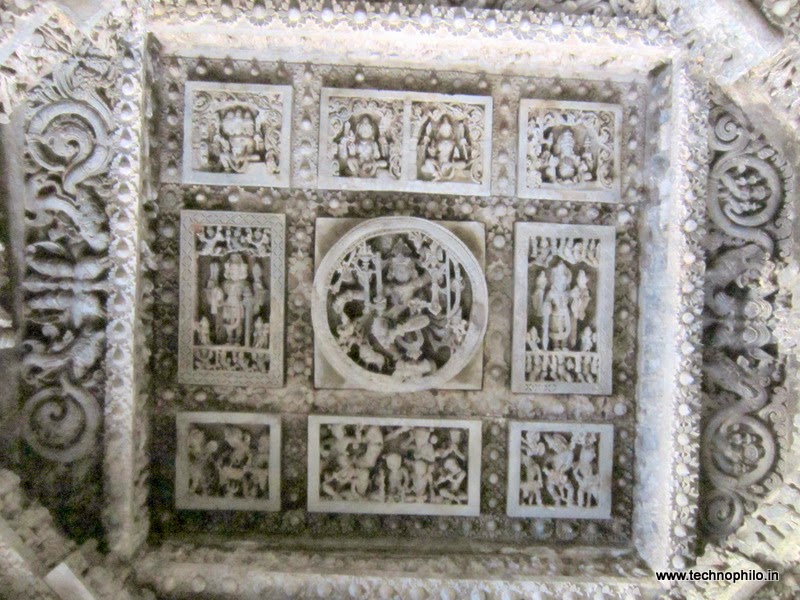 The vigorous temple building activity of the Hoysala Empire was due to the social, cultural and political events of the period. The stylistic transformation of the Karnata temple building tradition reflected religious trends popularized by the Vaishnava and Virashaivaphilosophers as well as the growing military prowess of the Hoysala kings who desired to surpass their Western Chalukya overlords in artistic achievement. Temples built prior to Hoysala independence in the mid-12th century reflect significant Western Chalukya influences, while later temples retain some features salient to Chalukyan art but have additional inventive decoration and ornamentation, features unique to Hoysala artisans. About one hundred temples have survived in present-day Karnataka state, mostly in the Malnad(hill) districts, the native home of the Hoysala kings.
As popular tourist destinations in Karnataka, Hoysala temples offer an opportunity for pilgrims and students of architecture to examinemedieval Hindu architecture in the Karnata Dravida tradition. This tradition began in the 7th century under the patronage of the Chalukya dynasty of Badami, developed further under the Western Chalukyas of Basavakalyan in the 11th century and finally transformed into an independent style by the 12th century during the reign of the Hoysalas. Medieval Kannada language inscriptions displayed prominently at temple locations give details of the temples and offer information about the history of the Hoysala dynasty.

Sri.Kedareshwara Temple situated at Halebeedu is about 400 meters towards South East of well known Hoysaleshwara Temple, many visitors are not aware of this beautiful temple. Kedareshwara Temple is a Hoysala temple built by King Ballala II and his younger Queen Abhinava Ketala Devi in 1319 AD.
According to the inscriptions, it was built by Hoysala king Ballala II and his queen Abhinava Ketaladevi in 1219 A.D. Some parts of this temple had been destroyed and some reconstruction work has been taken place in this temple. In-spite of this, the temple has retained most of its originality and presents a good view of a typical Hoysala Temple.
Kedareswara Temple is a fine example of Hoysala style of temple architecture. The carved ceilings of the temple are supported by finely polished pillars. The magnificent idol of Nandi Vahana in its lying posture adds extra elegance to the temple. Unfortunately portions of the temple collapsed and they are never restored again.
Sri.Kedareshwara temple is beautifully located with entrance facing the East. It's a Trikuta temple, dedicated to Shiva in the form of Kedareshwara. This temple is built during 1220 AD under the Hoysala rule.
The entire temple is in Star shaped and its beautifully studded with images of Lord Shiva, Vishnu Brahma, Lakshmi, Mahishasura Mardhini, Saraswathi, Krishna, Varaha, Ganesha, etc., etc., Each of these images are carved with great importance given to their Bhava and accordingly each image hold asthra (weapons) in different postures. The prabhavali is amazing and is completed in most cases. The upper part of the images above the Prabhavali is left blank, probably they intended to decorate but haven't done. 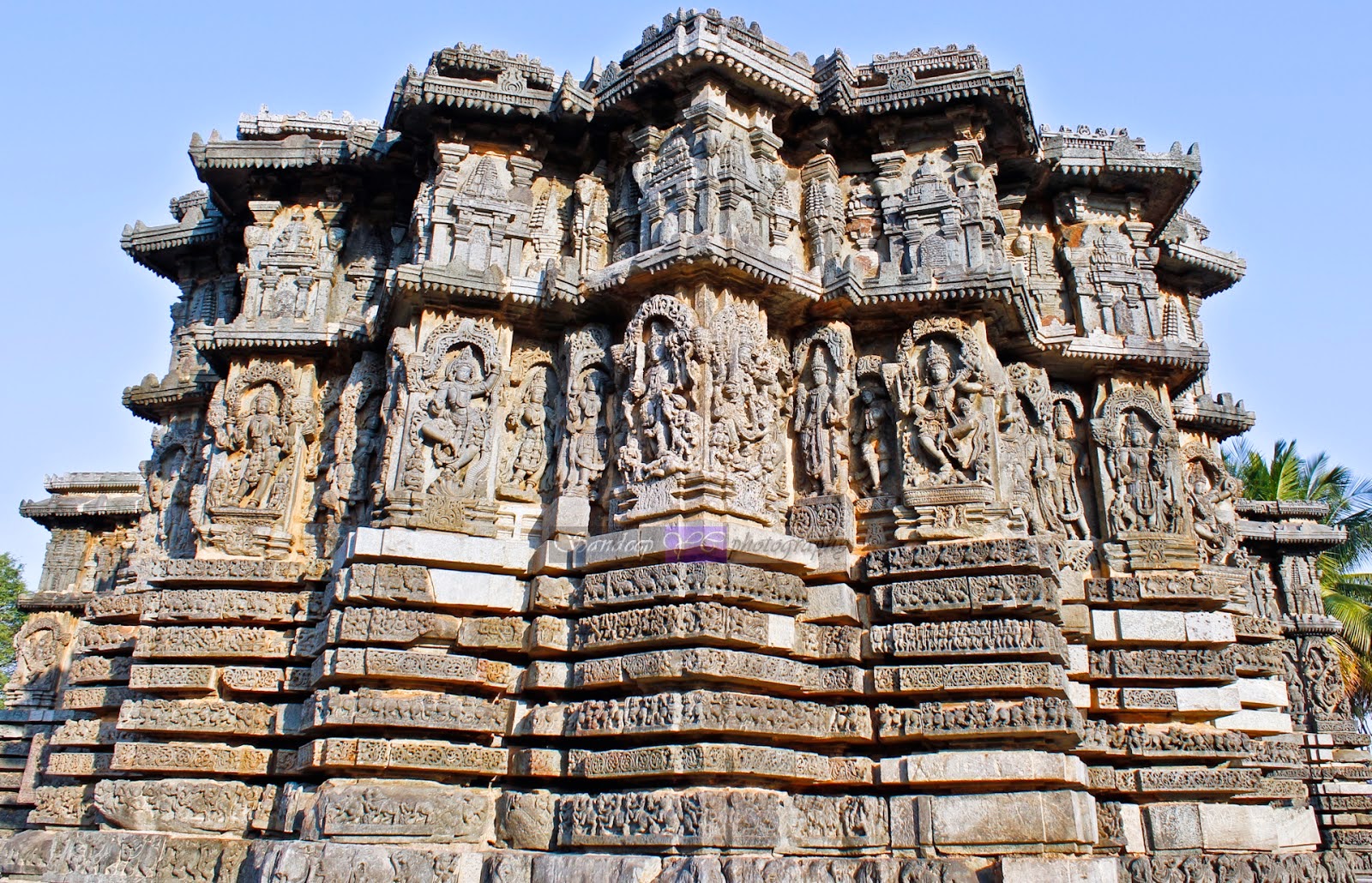 Star shaped structure of the Kedareshwara Temple
Careful observations of each image, especially the images situated in corners are amazing as they share the limbs with each other on either side. This part of imagination and execution really thrills your design and implementation capabilities. Image after image you feel they had mastered the art of 3 Dimensions and had understood the Geometry and Graphics very well. 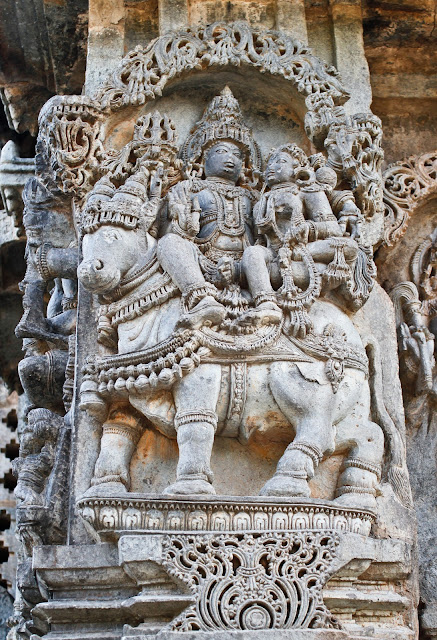 Image of shiva-parvati on the walls of the temple 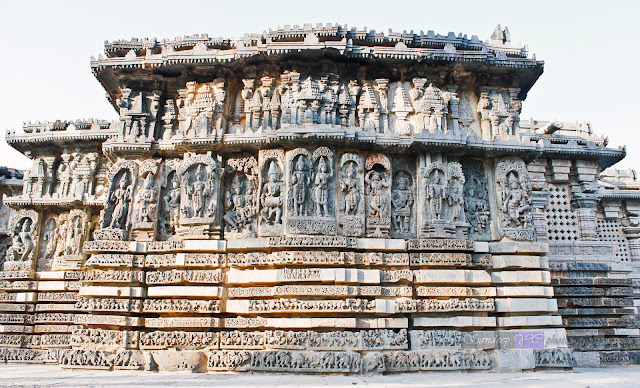 Friezes and the sculptures on the walls of the Kedareshwara temple

(literally "old city") is located in Hassan District, Karnataka, India. Halebidu (which was previously called Dorasamudra or Dwarasamudra) was the regal capital of the Hoysala Empire in the 12th century. It is home to some of the best examples of Hoysala architecture. Most notable are the ornate Hoysaleswara and Kedareswara temples. The city got the name "Halebidu" because it was ransacked two times during the invasion of Mallik Kafur.

The Chennakesava Temple,
originally called Vijayanarayana Temple , was built on the banks of the Yagachi River in Belur, by the Hoysala Empire King Vishnuvardhana. Belur, which was an early Hoysala capital is in the Hassan district of Karnataka state, India. It is 40 km from Hassan city and 220 km from Bangalore. Chennakesava (lit, "handsome Kesava") is a form of the Hindu god Vishnu. Belur is well known for its marvelous temples built during the rule of the Hoysala dynasty, making it and nearby Halebidu favored tourist destinations in Karnataka state.

Halebeedu  all temples are really an architectural marvel. Its amazing to see how different pillars or carvings look exactly same when looked at from a distance, but once you go near each a different and tell a different story. It covers a good deal of Hindu mythology and culture in such a small area. There are a good deal of carvings on the ceilings which an be viewed better if you use the lighting system available (for a cost obviously).